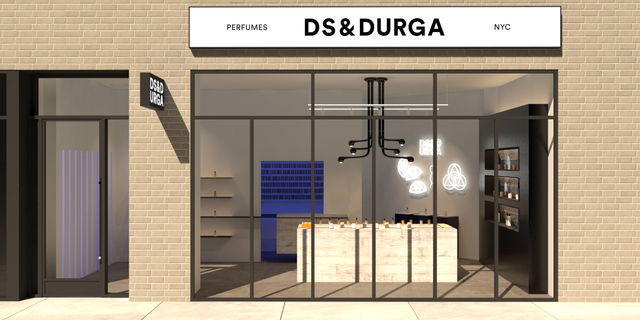 Indie fragrance brand D.S. & Durga is bringing its signature brand of "badass fancy" to Manhattan with a new store on Prince and Mulberry Streets.
Asked to describe the vibe of the store, cofounder and perfumer David Moltz landed on "badass fancy." He runs the brand with wife and cofounder Kavi Moltz, who trained as an architect and handles all things design for the fragrance line.
She worked closely with architects K&Co., with support by Pliskin Architecture, to come up with the design for the space.
"There's a lot of references to the aesthetics that we love ," Kavi said. "Brutalist architecture, punk rock, texture…which I think for most people, would translate to dark and edgy."
Design elements include a poured-concrete monolith in the center of the store where customers can read fragrance descriptions and smell the scents in overturned cups, as well as a wall unit that contains David's used ingredient bottles. The point of sale is a floating concrete desk, which "was a little bit of an engineering feat," Kavi said.
The space is outfitted for events, and the pair are planning to deep-dive different fragrances each month during an event in the store. Each scent has its own playlist, created by David, and film, which can be projected onto a wall in the store. "We’re going to have monthly events where we just theme out on each scent, so we’re going to have a Bowmakers night, and David will speak about it, and we’ll project a film about it and smell it," Kavi said.
The idea is to provide the option for customers to explore a fragrance story by showing the actual reference points David used during the creative process. "We're psyched to let you, at your own pace, get as deep as you want, rather than jamming it down your throat," David said.
While the store will have plenty of Instagrammable moments, like David's perfume bottles, which were frequently posted by visitors to the couples' Bedford Stuyvesant headquarters, the duo are building the space to generate dollar sales rather than just Internet buzz, they said.
"We need all the foot traffic we can get," Kavi said, noting the store's location is prime real estate for tourist traffic.
Beyond foot traffic, the shop will give DS & Durga's founders more opportunities to engage with customers directly. "Once David gets in there and he has excited customers, he'll get very excited to show new things," Kavi said. "If he knows we're having a Bowmakers night, but he's working on things that are near completion, knowing him, he'd bring them and be like, 'we have this, and this.'"
D.S. & Durga is doing between $8 million and $10 million in sales, according to industry sources, and is growing. The business took a small investment from Monogram Capital Partners in October, which is helping propel growth inside the business with new hires and with the relocation of the company's Brooklyn headquarters to a space in the Brooklyn Navy Yard.
Other plans in the works for the year include building out the brand's space at Liberty in London, as well as launching a body-care collection, which will be available in the brand's Rose Atlantic, Debaser and Bowmakers scents.
D.S. & Durga, with Monogram Studio, is also launching fragrance-themed T-shirts that say things like "Patchouli is Misunderstood." "We like them," Kavi said. "The margin's not great, but they're funny."
Source: Read Full Article