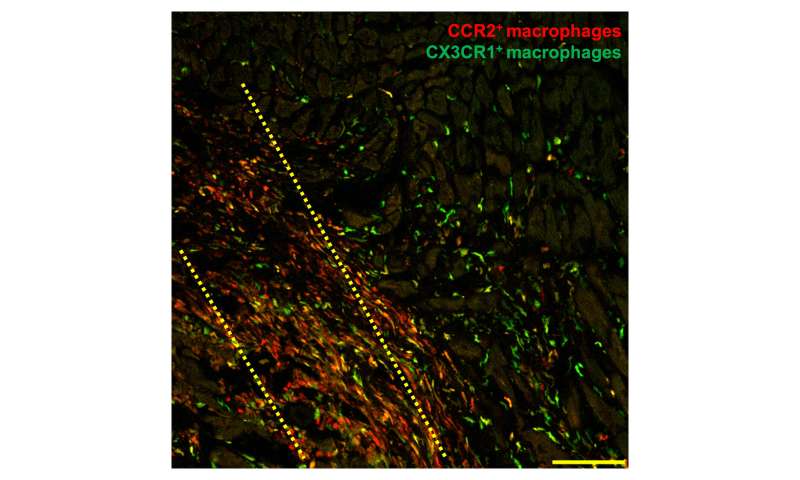 Stem cell therapy helps hearts recover from a heart attack, although not for the biological reasons originally proposed two decades ago that today are the basis of ongoing clinical trials. This is the conclusion of a Nov. 27 study in Nature that shows an entirely different way that heart stem cells help the injured heart—not by replacing damaged or dead heart cells as initially proposed.

The study reports that injecting living or even dead heart stem cells into the injured hearts of mice triggers an acute inflammatory process, which in turn generates a wound healing-like response to enhance the mechanical properties of the injured area.

Mediated by macrophage cells of the immune system, the secondary healing process provided a modest benefit to heart function after heart attack, according to Jeffery Molkentin, Ph.D., principal investigator, director of Molecular Cardiovascular Microbiology a Cincinnati Children’s Hospital Medical Center and a professor of the Howard Hughes Medical Institute (HHMI).

“The innate immune response acutely altered cellular activity around the injured area of the heart so that it healed with a more optimized scar and improved contractile properties,” Molkentin said. “The implications of our study are very straight forward and present important new evidence about an unsettled debate in the field of cardiovascular medicine.”

The new paper builds on a 2014 study published by the same research team, also in Nature. As in that earlier study, the current paper shows that injecting c-kit positive heart stem cells into damaged hearts as a strategy to regenerate cardiomyocytes doesn’t work. The findings prompted Molkentin and his colleagues to conclude that there is a need to “re-evaluate the current planned cell therapy based clinical trials to ask how this therapy might really work.”

The study worked with two types of heart stem cells currently used in the clinical trials—bone marrow mononuclear cells and cardiac progenitor cells. As the researchers went through the process of testing and re-verifying their data under different conditions, they were surprised to discover that in addition to the two types of stem cells, injecting dead cells or even an inert chemical called zymosan also provided benefit to the heart by optimizing the healing process. Zymosan is a substance designed to induce an innate immune response

Researchers reported that stem cells or zymosan therapies tested in this study altered immune cell responses that significantly decreased the formation of extra cellular matrix connective tissue in the injury areas, while also improving the mechanical properties of the scar itself. The authors concluded: “injected hearts produced a significantly greater change in passive force over increasing stretch, a profile that was more like uninjured hearts.”

Molkentin and his colleagues also found that stem cells and other therapeutic substances like zymosan have to be injected directly into the hearts surrounding the area of infarction injury. This is in contrast to most past human clinical trials that for patient safety reasons simply injected stem cells into the circulatory system.

“Most of the current trials were also incorrectly designed because they infuse cells into the vasculature,” Molkentin explained. “Our results show that the injected material has to go directly into the heart tissue flanking the infarct region. This is where the healing is occurring and where the macrophages can work their magic.”

The researchers also noted an interesting finding involving zymosan, a chemical compound that binds with select pattern recognition receptors to cause an acute innate immune response. Using zymosan to treat injured hearts in mice resulted in a slightly greater and longer-lasting benefit on injured tissues than injecting stem cells or dead cell debris.

Looking to the Future

Molkentin said he and other collaborating scientists will follow up the findings by looking for ways to leverage the healing properties of the stem cells and compounds they tested.

For example, considering how heart stem cells, cell debris and zymosan all triggered an acute innate immune response involving macrophages in the current paper, Molkentin explained they will test a theory that harnesses the selective healing properties of macrophages. This includes polarizing or biologically queuing macrophages to only have healing-like properties.